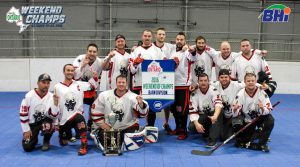 St. Catharines, ON—This past weekend, St. Catharines played host to the Weekend of Champs, the final tournament in BHi’s All Ontario Cup.  With 28 teams spread over 3 divisions, the best of the best battled it out for ball hockey supremacy and a championship ring.

The 7-team Intermediate Division was loaded with high-calibre talent, led by perennial winners, the Punishers.  The Punishers entered the Weekend of Champs having won all 4 of the AOC’s preliminary tournaments and looking to add a fourth.  They opened up the tournament with a win before losing game 2 to rivals, the Throwbacks.  They continued to cruise all the way to the semi-finals where they lost 3-2 to London ball hockey powerhouse, the Reapers.

A team that boasted the likes of McKenzee MacQueen, Iain Downes and Gage Gonyou, the Reapers were ready to take on AOC newcomers, The U.  The game started off fairly even until Eric Tardiff of The U opened the scoring midway through the first period.  McKenzee MacQueen answered for the Reapers in the second and the two teams played a tight checking game the rest of the way.  Just when the game looked poised to go to over time, The U’s Jesse Miller took a nice feed from Eric Tardiff with less than a minute left in the game, sealing the win, and the championship, for the Niagara U.

The Rec Division for the Weekend of Champs featured 6 teams, including the Niagara Warriors and the Hamilton Lightning; two teams who know a little something about winning.  To the surprise of no one, the Lightning and Warriors cruised through the preliminaries, setting up a semi-final showdown between the two juggernauts.

Hamilton opened the scoring late in the first when Brandon Agnew was set up nicely by Keeryn Horton and Jon Leclerc.  Niagara took over in the second period with 3 straight goals from Nick Lostracco and a pair from Pat Riley.  Alex Murdoch got the Lightning back in the game with a goal in the third period but Riley put it away for the Warriors with his third goal of the game.  Niagara was set to the play the Healthy Scratches in the final after they the Rebels in their semi-final game.  The Healthy Scratches scored late in the first period and that was all they needed to secure the Rec Division Championship, beating the Warriors, 1-0.

The Barn Division featured 15 teams from across the GTA, including the Lincoln Pitbulls, Hamilton Haze and the Toronto Reign.  After a lengthy preliminary round, the field was narrowed down to 8 teams, including newcomers, Lorne Ave. Stars, who quietly went undefeated in the early rounds.  While everyone expected the semi-finals to consist of the usual suspects, it was little-known BDB who took the final semi-spot after Lincoln was trounced by the Haze 7-0. The Toronto Reign ended Lorne Ave’s Cinderella tournament and set themselves up for a Barn Division Final with the Hamilton Haze.  After Justin Murray scored late in the first to put the Haze up 1-0, it was a chess match the rest of the way until Ken Mclean made it 2-0 Hamilton in the third.  With the extra attacker on, Eric Camara put one past Bryan Blancher but that’s as close as they’d get as Hamilton took the title of Barn Division Champs.

REGISTER NOW FOR THE WINTER SEASON 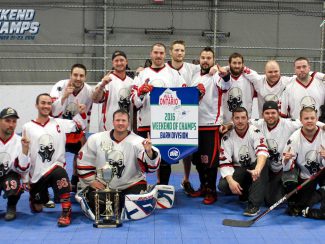